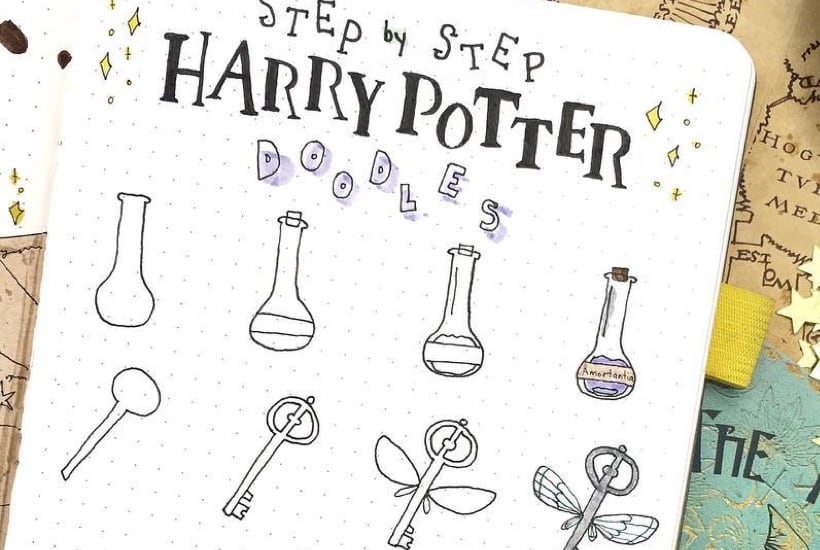 If you’re going with a Harry Potter theme in your bullet journal this month, then this step by step doodle tutorials are definitely going to come in handy! With everything from the golden snitch to Hedwig… you’ll be able to fill out your entire theme will all these fun ideas

Before we get started, if you’re into printables… check out some of my most recent updates!

Here are the doodles I love: 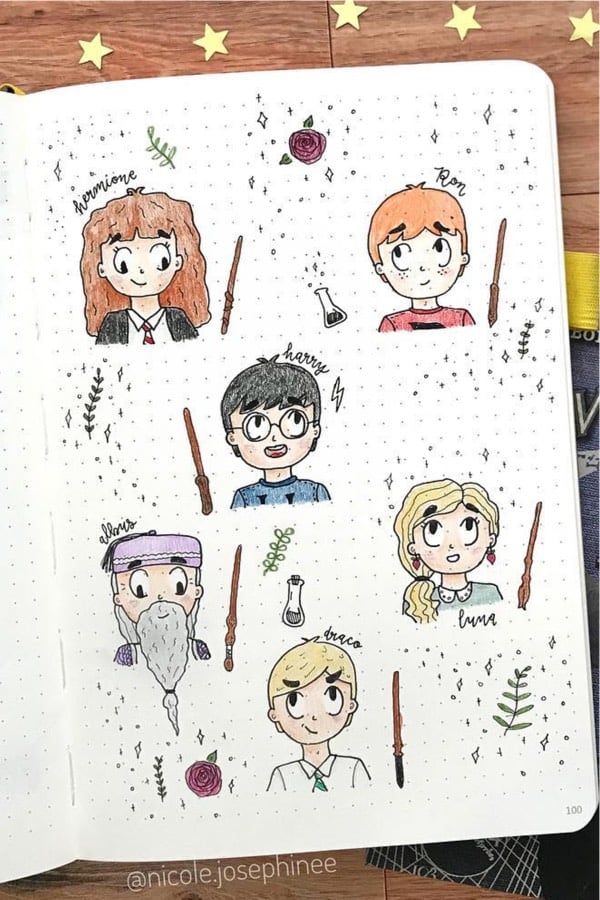 Do you have a favorite Harry Potter character? I LOVE Hermione. Don’t worry, you’ll be a “wiz” at drawing all of them with this inspirational doodle drawing! 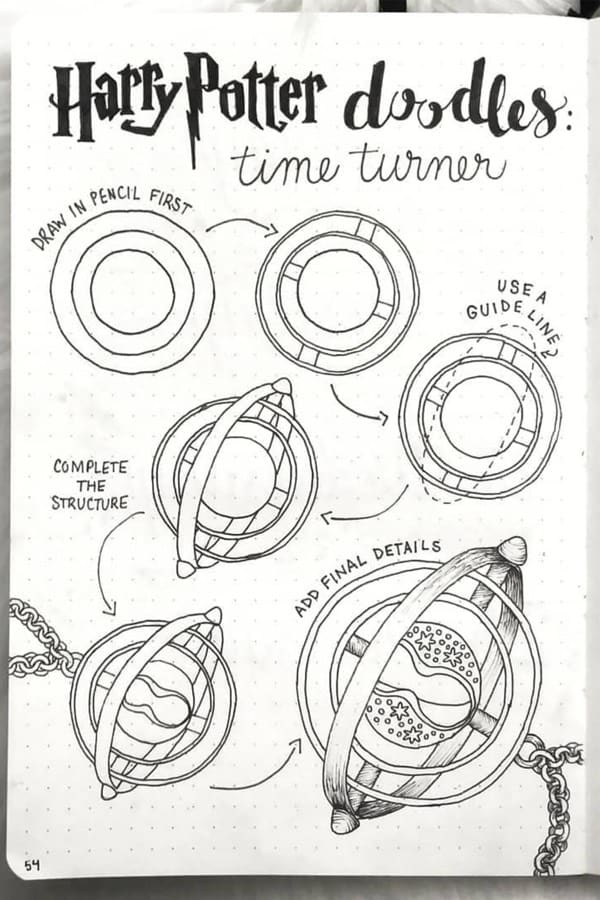 Geometrically speaking, you’d think it would be a challenge to learn how to draw something as complicated as the time turner but this tutorial makes it so easy! Wait until you see how in just 5 steps you can create something so intricate in such a short amount of steps and time! 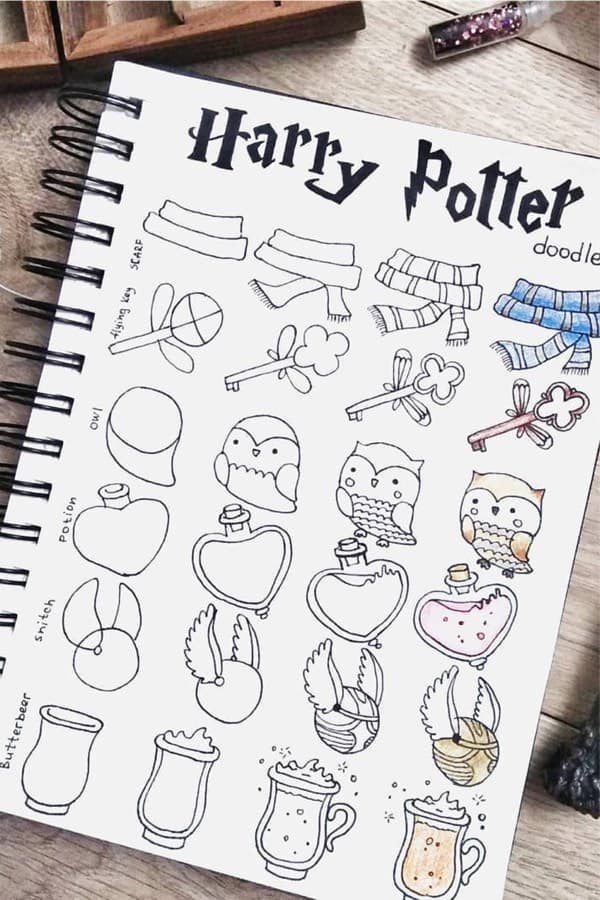 What color would your scarf be? Hers is blue and white for Ravenclaw, but in this tutorial, you can use any color customization, and it also includes a doodle for the owl, magic potion, and a simple flying Quidditch ball. More a Gryffindor girl myself, though 😉

How To Draw Harry Potter 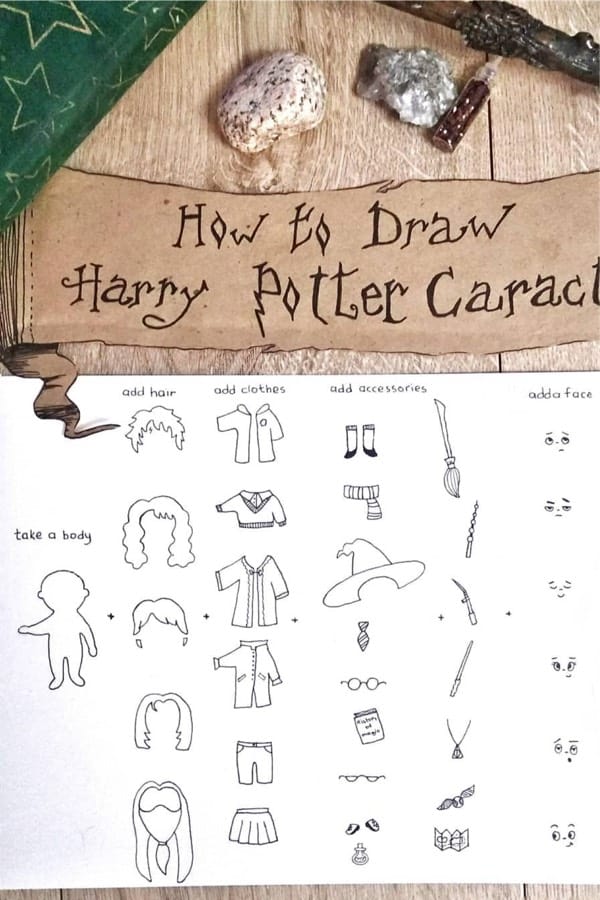 This doodle tutorial for making Harry Potter characters and pets is “SIRIUS”LY unique! I love how everything is something scattered and you have the option to choose different hair, clothes, glasses, and faces. The customization in this tutorial is on point! 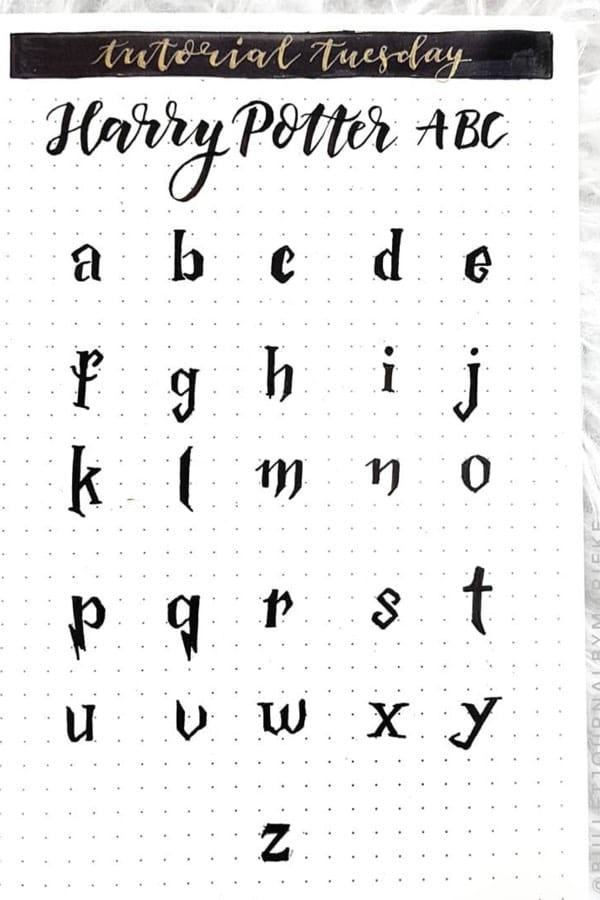 ABC, easy as 123! Ever wondered how some of your favorite bujo doodles and spreads incorporate medieval handwriting into them that is almost too on point with the real deal? Now you can learn how to do this with the entire Harry Potter font alphabet!

How To Draw Dobby Dobby is a free elf, am I right? Wait until you see this tutorial on Dobby the Elf… in just six simple steps you can draw your very own “free elf”. I am obsessed with the details in his big cute ears! 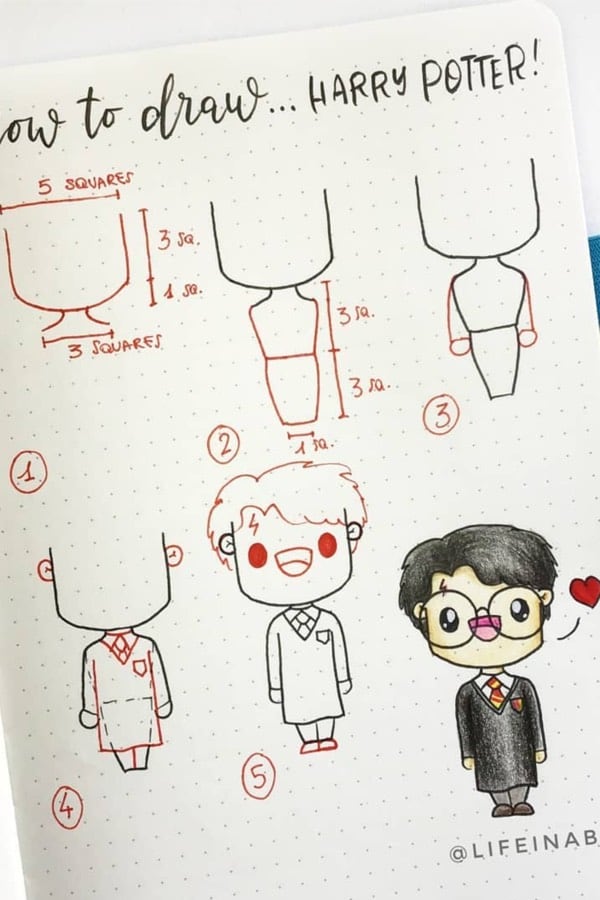 You’re a wizard, Harry! This will teach you such an easy way to draw your very own Harry Potter in quite the unique way. His glasses and head are huge, but his smile is big and it looks just like him! Plus, the steps are so easy to follow! They see me “rowling”…. They hating! This tutorial is everything “Harry” in one. The glasses, the scarf, the broom, and even a tutorial on a letter. This is a good go-to staple tutorial! 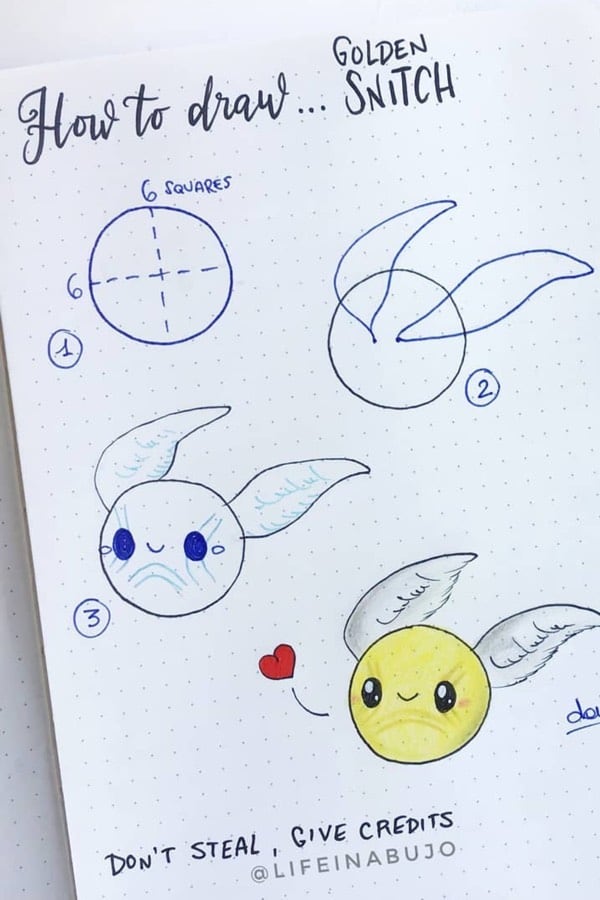 This golden snitch tutorial is a “sirius catch”! I love how she gives a face to the Golden Snitch, and how she so intricately draws it within just four steps. Stay golden! 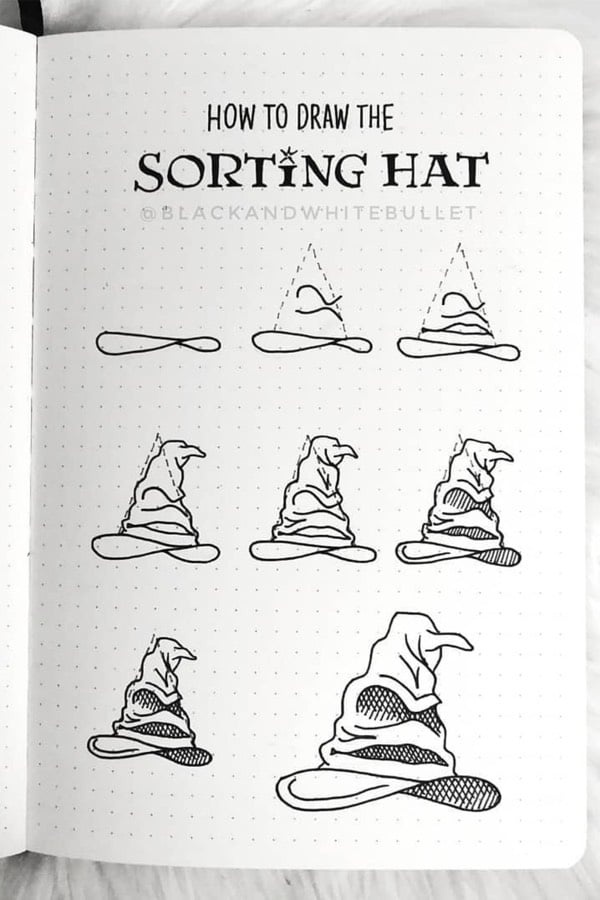 Hatters gonna hat… I am obsessed with this tutorial of the sorting hat! It literally looks like the hat is all bunched up, and the doodle is so descriptive, and she shows you how to draw it in few and simple steps. The sorting hat said “I belong with you!” 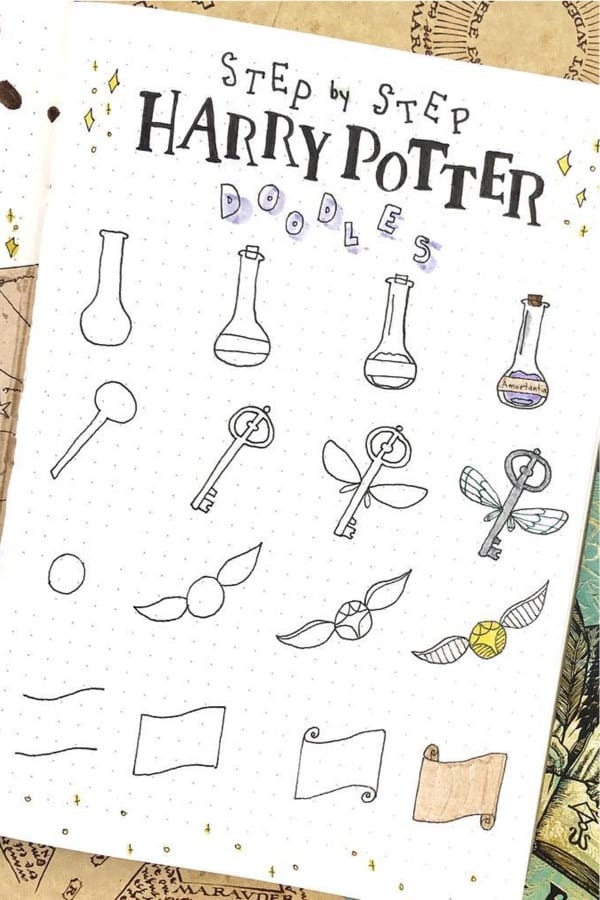 This doodle tutorial can “slytherin” to most bujo spreads! I love how simple and easy she makes these three step drawings of a broom, magic potion, and the Golden Snitch. Plus, they are small so they can be squeezed into any spread Harry Potter themed or not 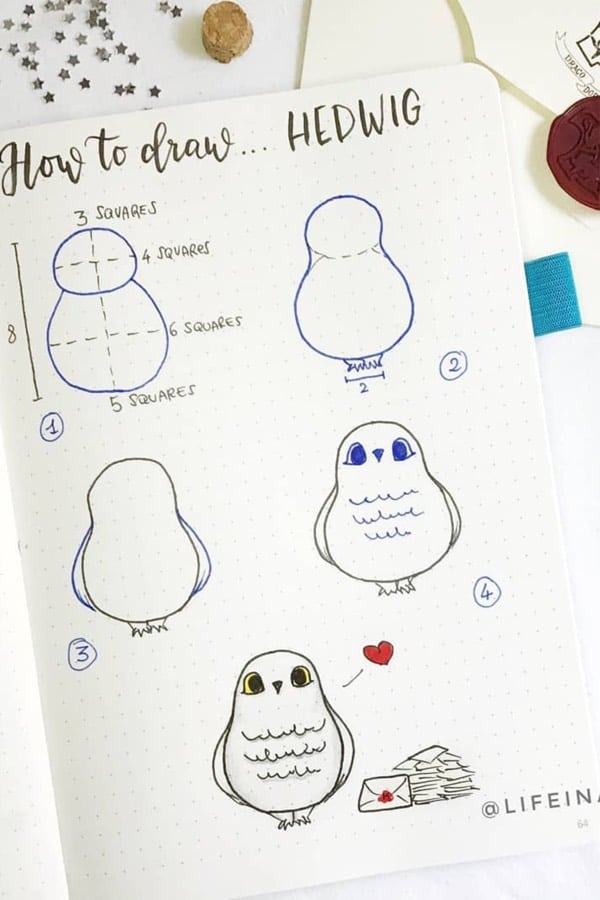 This tutorial is the jack of “owl” trades! If you ever wanted to learn how to draw Hedwig, or any owl for that matter, than you won’t believe how easy this tutorial is!

Pin To Save For Later! 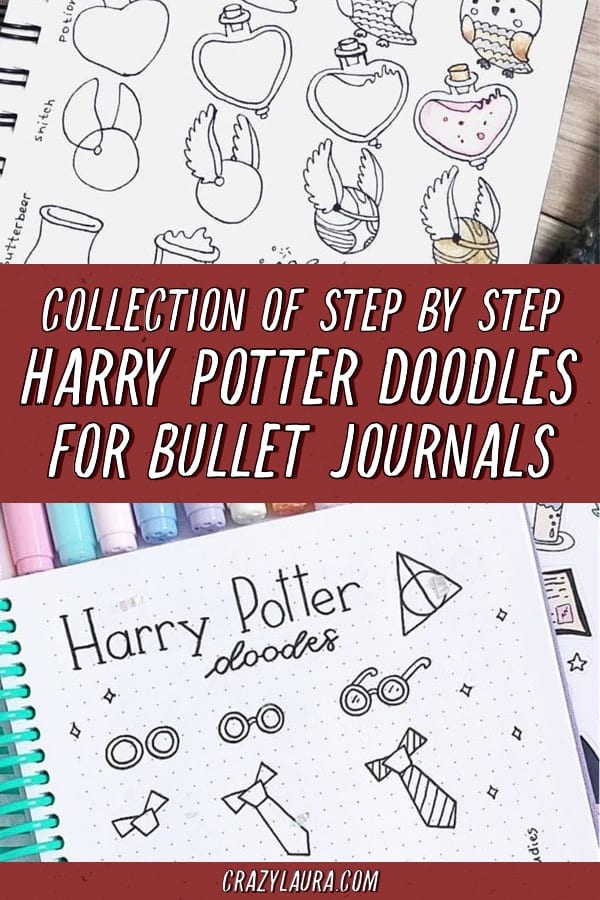 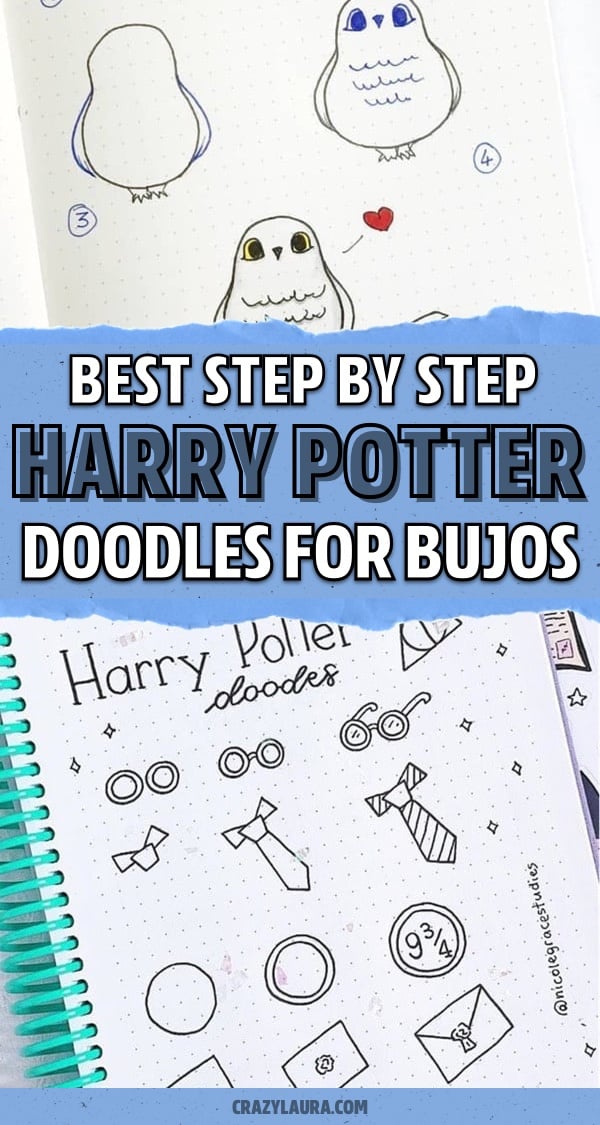